There’s not many series that get remembered as fondly fifty years later like Ashita no Joe. Compared to the number of anime and manga released that year, Joe probably represents a tiny percent, but in Japanese pop culture has gone on to occupy an iconic place.

The previously discussed two elements of the story, being Joe as a working-class hero and the tragedy of his story, along with the circumstances at the time all worked together to make this happen. Thus, this week I’d like to round off my celebrations for the fiftieth anniversary by exploring exactly how it has affected popular culture, both during it’s run and afterwards.

Perhaps one of most interesting stories comes from after the first Joe anime in 1970. Riikishi Toru dying was one the first truly magnificent moments in Joe due to how much of a sheer gut punch it is, as well at it being totally unexpected. When I read that he died, I actually cursed aloud and repeated “No… no!” as I read the rest of the chapter in shock.

It seemed that Japanese fans at the time had a similar reaction, as emotional fans actually held a funeral for Riikishi following his death in the anime. A Joe fansite provided this description of the event:

“It was a weekday, but all types of people were there – elementary schoolers; university students; office workers; and even civil servants. At the funeral altar a commemorative portrait was placed, attendees offered incense and sutra chanting filled the room. Hidou Isao, who was to sing the opening song for the anime airing next month [Ashita no Joe 2], did a pretend fight with a real boxer, and then sang the opening song enthusiastically.

After the count of ten, in the midst of the quietly started memorial addresses, the feelings of Terayama Shuuji’s [sang the opening song for Ashita no Joe season one] “Riikishi Tooru, you are the ‘tomorrow’ of tomorrow’s Joe…” became apparent.

[…] And so, we condemned his greatest rival who damned him to death, shrieking “Who killed you, who was it, Riikishi Toru!” whilst ripping up and throwing pieces of paper with memorial addresses written on them.” – Description of 1970 ‘funeral’ for Riikishi Toru (source)

Many Japanese sources at the time do point out that this was most likely a publicity stunt, considering how many people related to the actual production of Joe were present, but at the same time the sheer number of people who attended as well as the varied demographic of the attendees is surprising. Joe was not only an effective piece, but also a universal one – owing in many ways to the working-class roots of the character, making him seem more ‘real’ and therefore appealing to adults as well as children. 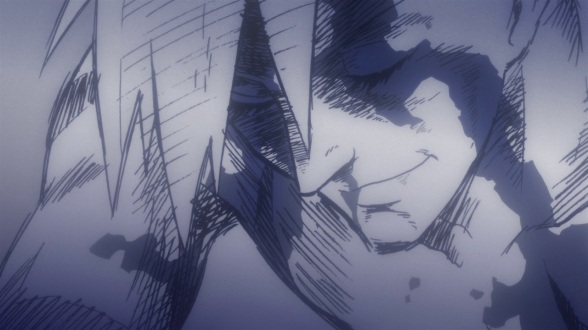 In turn, Joe’s death at the end of the series has endured in the Japanese national consciousness. Even though there wasn’t a funeral or anything, it’s power can still be seen in the countless recreations of it’s iconic final scene, particularly in Tengan Toppa Gurren Lagann (above). The tragedy of this moment, among others things, means that it has become one of the most iconic endings in the medium.

This is ironic, considering that Chiba Tetsuya never intended for the ending to show that Joe had died – in an interview he describes his thought process behind the ending as such:

“When I drew that last scene, I hadn’t actually thought of Joe as having died. I just wanted to show that he had used up all of his lifeforce, all of his willpower; I wanted to draw a scene of fulfilment. When we finished up serialisation, I felt a sense of accomplishment and satisfaction in thinking ‘it has to be this way’.” – Chiba Tetsuya, interview with MSN (pg. 3)

In this sense, more important to Tetsuya was showing that Joe had given everything he could’ve, not necessarily that he had died. Even if Tetsuya never intended Joe to die however, the scene certainly doesn’t contradict such an interpretation. Because of this, as time went on, this became the accepted interpretation and neither Tetsuya nor Asao Takamori have ever attempted to refute it.

Moreover, the way that the series ended has inspired thousands of people, like me, to both read the series and praise it’s merits. Add to this the very successful TV anime Ashita no Joe (1970) and Ashita no Joe 2 (1980), as well as the recap movie of 1980 based on the 1970 series and the original 1981 movie based on the story covered in the 1980 series, and there has hardly been a lack of Joe material for Japanese fans over the years.

Speaking of anime, beyond rereleases of the original series, Joe’s influence is still felt in original storytelling. This spring season will see the broadcast of Megalo Box, a supposed “50th anniversary Joe celebration project.” From the PV alone, it certainly seems like it was influenced by Joe – everything from the boxing within it; the dirty slums that our protagonist, Junkdog, inhabits; to the dark, gritty aesthetic that seems to permeate the series.

There isn’t much information beyond that, so we’ll just have to wait until it begins airing to find out more about the series. Yet, it’s reverence for Joe and his legacy is nothing to scoff out, especially when you consider the majesty of what it is inspired by. I, for one, am eagerly awaiting it’s 6th of April premiere.

Thus, the legacy of Ashita no Joe is one that has lasted throughout the ages, and will no doubt continue to endure as long as there are ways to revisit the series and experience it’s majesty first-hand. Perhaps, in twenty-five years, there’ll be even more recognition for Joe, and I can only imagine what the 100th anniversary celebrations may look like.

I’d like to end this long journey through the world of Ashita no Joe with a final comment from Chiba Tetsuya, artist for Joe, who lectured for a while at Utsunomiya University:

“Now, at the university, I often come in contact with students, and when I look at their lives I feel like it’s a bit of a waste. I want them to take some more risks and try to fulfil their own potential. After all, we live in a era of the internet and electric books, with even more, new possibilities emerging. Thus, manga is still in the midst a new era. Because I want young people to teach me what can be said in manga, I am too in the midst of searching for what I can do, as a mangaka, to go out in flames.” – Chiba Tetsuya, interview with MSN (pg. 3)

Thus, like his creation, Tetsuya is searching for a meaningful way to spend his time on this Earth. Perhaps we could all learn a lesson or two from Tetsuya and Joe, in order to reach a better tomorrow.

Thank you everyone for joining me on this Joe journey. It’s been really fun doing this, since I love the series so much, but also I think doing several pieces on one topic allows for deeper and further exploration of it. I’ll probably do more of these in the future because of this, but also because doing this kind of block programming is easier to fit around my university work. As I start up university again, my posts might become more erratic, so apologies for that. In any case, let me know what you thought by leaving a comment or via Twitter.