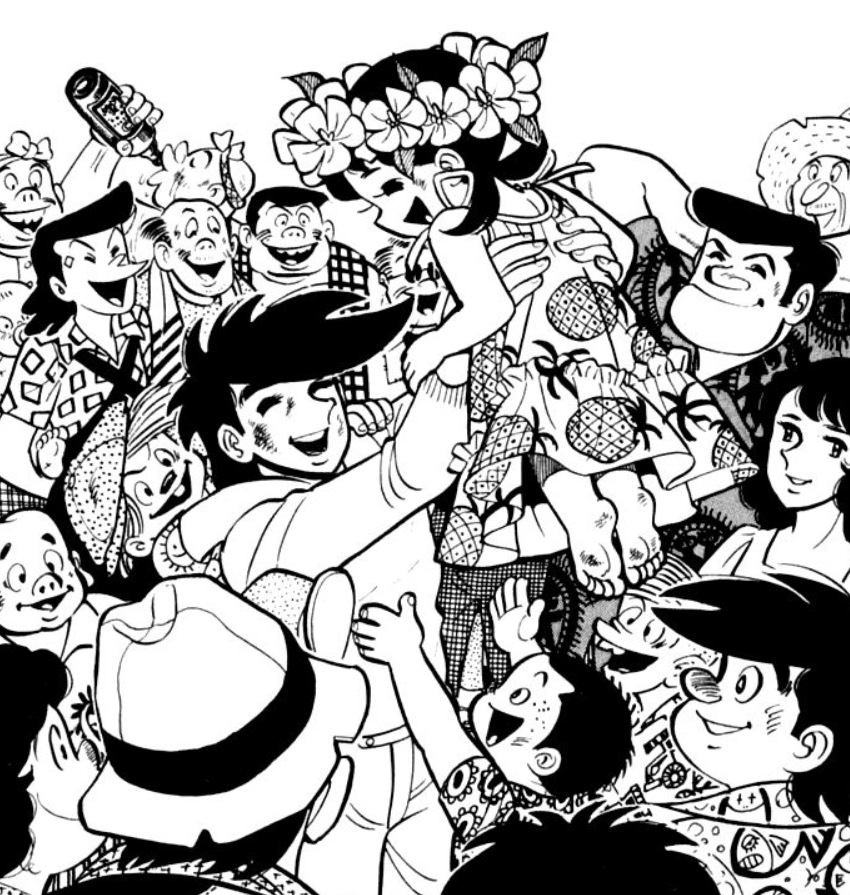 For those of us in the west, losing a war is an experience we’ll probably never be able to understand.

But those who read Ashita no Joe once it began serialisation in 1968 knew the realities of that experience better than any of us. Losing a war and losing it in such a devastating fashion that only a nuclear bomb can deliver cut across all of Japan, regardless of age or gender.

Not only were two towns completely lost in the war – Nagasaki and Hiroshima – the war effort had ripped the country apart. Tokyo lay in rubble after the nightly fire bombings. Most of the labour force had been slaughtered due to conscription. Families shouldered the burden of lost loved ones. Children had been born, raised, and adopted the wartime ideology. Above all, the spectre of imperialism still loomed over the nation in the form of the American occupation, having to swallow the shame of being used as a forward operating base for the expansion of the American sphere of influence.

The decades that followed the end of the war in 1946 weren’t pretty either. The shortcomings of the American occupation meant that Japan didn’t transition as smoothly into democracy as was planned, for one – MacArthur’s failure to remove wartime personnel from the bureaucracy meant that the wartime fascist ideology still permeated politics, and the country’s leaders fought many continuous battles with it’s citizens over the pacifist Clause 4, which prevented Japan from maintaining an army. On the labour front too, the emerging industrial sector found itself clashing with newly formed trade unions as workers were subject to long hours for little pay in the reconstruction effort. The 1960s then saw the emergence of militant student movements, whose activities would reach a peak in 1968. Furthermore, as aid from the US streamed in to the burgeoning Japanese industrial sector (around $2.5 billion), so too did the workers – cramming themselves into the only places they could, shanty towns and slums. 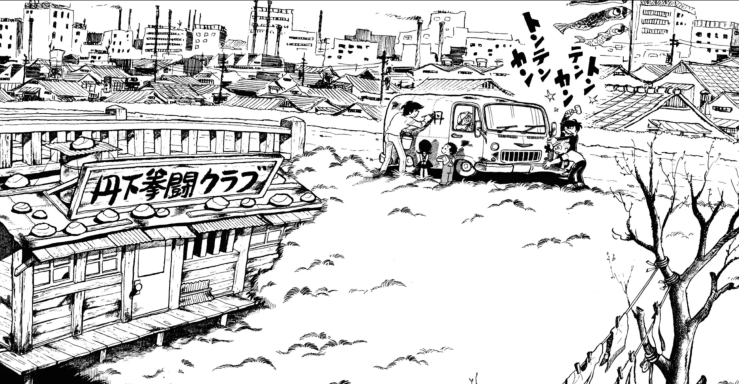 This is the kind of setting we find ourselves confronted with in Ashita no Joe. By the late 1960s, things had certainly improved, but it would not be until the late 1980s with the ‘bubble’ economy that things would really improve for the better for most people. On the contrary, the world of Joe is one that is still reeling from the effects of the war, in that proper housing hadn’t been built and workers were overworked and underpaid – even it isn’t explicitly mentioned. The town of Doya-machi that Joe et al. inhabit is one of ramshackle construction, widespread crime and violence. It isn’t so different from the very real slum of Sanyo, which it was based on and continues to honour the legacy of Joe even today. What makes it even more real is the feeling of community that is present in the fictional setting, as each character in the slum helps each other and bands together in their shared suffering.

Although Sanya may have represented the very worst of Japanese society at the time, even those who lived comparatively better lives weren’t that much better off. Movies and literature had already been popular forms of mass entertainment before the war, but the import of American comics such as Superman along with Disney cartoons inspired many creatives to take up comics. One such creative was Osamu Tezuka, whose seminal work Astro Boy would both catapult manga into the mainstream and legitimise it as an art form. For those still suffering, the fantastical worlds of manga were a welcome escape from the drudgery of the everyday. Not only did the medium of manga allow more freedom to the author as they could draw anything from their imagination, but the serialised, weekly format of manga once the first magazines began to emerge in the 1960s meant a constant stream of entertainment, far outpacing in terms of quantity film and animation. 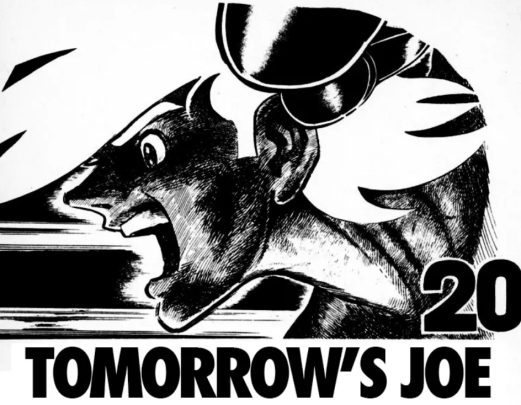 When Ashita no Joe began serialisation in 1968, manga had therefore already begun to develop itself as a medium in earnest. Weekly Shonen Magazine, the magazine in which it was serialised, had also already developed a strong following, thanks to Cyborg 009 and Kyojin no Hoshi (Star of the Giants). Because of this, when Joe began it already had available to it a large audience, as well an audience that understood the power and artistry of manga. In turn, authors Chiba and Takamori were able to go beyond a simple genre piece, instead using the sport of boxing to tell their very real tale of human infallibility and tragedy. And when the story had things to say, there were people there to listen – a powerful fact that is often overlooked since we now live in a time where manga is insanely popular and treated as an art form by many.

Even so, the percieved ‘rules’ of sports manga and the stereotypes that permeate it today weren’t yet established. The aforementioned Kyojin no Hoshi was one of the only sports manga that predated Joe, and even that barely resembles the type of sports manga we have today, such as Haikyu! and DAYS. Because of the lack of conventions, Chiba and Takamori were therefore free to create their story in any way they so wished – even by not getting to the boxing part of the manga until about thirty chapters in. In turn, readers had no idea what to expect from a sports manga, and therefore weren’t turned off by Joe‘s disregard for the conventions we accept today; they simply appreciated it as a story. And they certainly weren’t disappointed.

Furthermore, Joe was one of the first mainstream manga to properly portray the real lives of those who read it, which made it an incredibly powerful piece. The series that had already become popular before it – namely Astro Boy and Cyborg 009 – were all fantastical in nature, often science-fiction, and sought to distract readers from the real world with their futuristic escapades. Joe, however, never sought to shy away from it’s real life setting, depicting in all it’s squalor life in Doya-machi. Sports series before it, such as Kyojin no Hoshi, hadn’t touched on this, and so for readers of sports manga this was also a welcome surprise. Ultimately, it made the events of Joe feel much more real, ensuring that it would last forever in the Japanese national conscience. 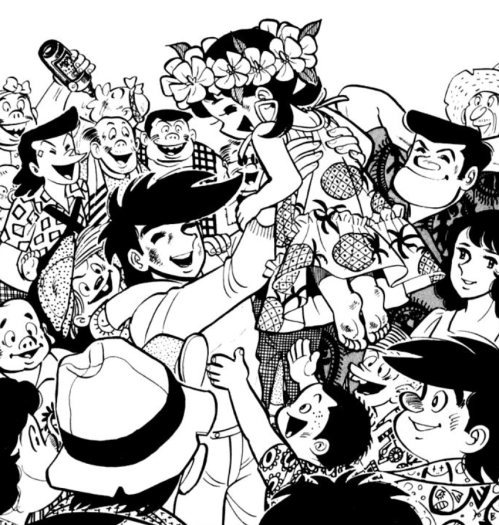 All of these factors enabled Joe to become the phenomenon it did. Losing the Second World War created the need for escapist entertainment, but in turn readers were constantly exposed to settings and stories alien from their own circumstances, which made the comparatively contemporary and realistic Joe both at once popular and distinctive. Furthermore, although some elements of Joe may seem affrontish when considering it as a genre piece, readers at the time didn’t have this problem.

Even so, it would be inaccurate to dismiss Joe‘s success as simply a matter of circumstance. After all, as we near the series’ 50th anniversary this year, it is still widely known and celebrated as a masterpiece. Having read Joe to celebrate, I was able to pinpoint two elements of the series that have ensured it’s success even today – it’s working-class roots and the tragedy of Joe’s tale. Stick around for these coming weeks as I explore these two elements, as well as examine the legacy of Joe in the long term.

This month I’ll be posting Joe stuff to honour the series’ 50th anniversary, in case that wasn’t obvious. As for why, I’m going back to university soon so I wanted to get a month’s worth of content planned out. Yet reading Joe has had such a profound effect on me that I knew immediately after reading it that it deserved more than one, throwaway post. Let me know what you thought about this one either by leaving a comment or via Twitter.