Spoiler-free, although includes images with text edited out. Decide for yourself.

Despite being one of the newer additions to Weekly Shounen Jump, Kouhei Horikoshi’s Boku no Hero Academia has quickly amassed a huge following. This is no surprise as, after having gotten up to date myself, it pretty much executes everything necessary to a good shounen manga very well. So let’s break down this manga in order to discover how exactly it has become a shining example of the genre.

Looks good when it needs to

Perhaps the most fickle element of a good shounen manga is how it presents itself visually. Ultimately, most Japanese readers will only pick up a series if it looks good on the cover of Jump or on the cover of it’s latest volume. Luckily, Boku no Hero Academia has bags of visual flair when it is needed the most. It’s character designs probably best reflect this – all of which are unique and interesting. This translates very well to when it is given colour pages in Jump and also to it’s volume covers.

But beyond promoting itself, the fact that Boku no Hero Academia has a stronger visual identity than a lot of other shounen manga – the first that comes to mind is Bleach, of which the artstyle was messy at the start but became progressively lazier as the series went on – means that setpieces are delivered with extra visual punch. I won’t pretend that the series is a work of art or anything, especially considering that the majority of scenes more geared towards comedy are a step back from the moments where it really shines visually, but when the series needs to step up it’s game in terms of art, it takes such a duty and runs with it.

Furthermore, the aforementioned varied character designs do wonders for the series considering it’s large array of characters. As was one of my problems with Naruto, once more above all as the series went on, with as many characters as the series has it is very easy for the reader to become confused or not aware of who characters are. However, because Horikoshi makes a concerted effort to come up with unique character designs, it is easy for the reader to at least recognise each character (remembering names might be a little tougher, as I found). This is an aspect that probably applies more to the younger side of the shounen demographic, but is no doubt a part of the reason for the manga’s success and an integral part of the visual flair the series demonstrates.

I know that I’m talking a lot about Naruto here, but that’s mainly because it’s one of the most well-known shounen manga that I know about also (otherwise I would talk about One Piece), plus it exemplifies many of the things that mainstream shounen manga doesn’t get right. One such thing is that often the stakes of the story or even of particular battles are either not clear or simply not appreciated by the reader. This often leads to the perception of “plot armour” and that fights simply revolve around “power levels” instead of narrative circumstances. As you may have guessed, Boku no Hero Academia skilfully avoids these problems and instead effectively realises the stakes of the story and even of each individual battle. 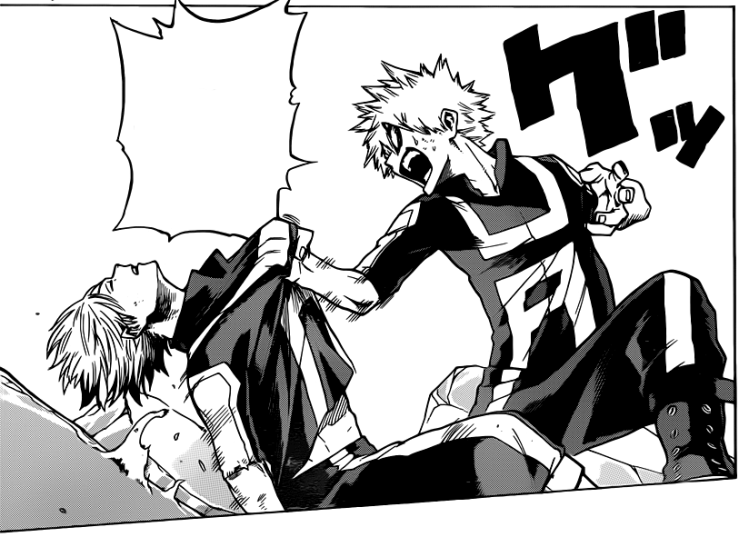 My personal favourite arc (so far) is the Sports Festival arc, which the anime unfortunately just missed with it’s slipshod pacing. In this arc we are able to perfectly see what the outcome of each battle means for the characters and the overall story. For Bakugo (right, pictured) it means beating Deku and fulfilling his ego fairly in front of the entire nation. For Todoroki it means proving to his father that he doesn’t need to succeed him. For Deku himself, it means proving himself to All Might. Consequently, the reader is able to see the value of each battle and feel a certain amount of anticipation in regards to the possible outcomes. I would also say that fights are less about power levels and rather the psychology of the characters, which will become apparent if you read the arc.

Tackling “plot armour” is a difficult thing for a shounen manga to do. It’s quite obvious that the main character will eventually win, plus major character death is hardly a feature of the genre. But one thing that a mangaka can do is show that such a victory was not easily won. Probably the best example of this is as occurs in Fullmetal Alchemist, where the main character does eventually “win”, but not without great loss and sacrifice. Given that I think Fullmetal Alchemist is one of the best shounen series ever made, the fact that I think Boku no Hero Academia might be on course to do the same kind of narrative outcome is very encouraging indeed. Deku’s quirk is hardly one without harm and we have already seen the toll it has had on his body. By demonstrating that none of Deku’s victories are easily won, Horikoshi avoids the problem of “plot armour” as well as opens up some very exciting possibilities for the future of the story.

Both from a business perspective and a reader’s perspective, it is important that people are drawn into the universe of a manga – whether it be to boost sales or how much you enjoy it. Boku no Hero Academia has the ability to fulfil both aims by grace of it’s extensive, almost limitless universe. 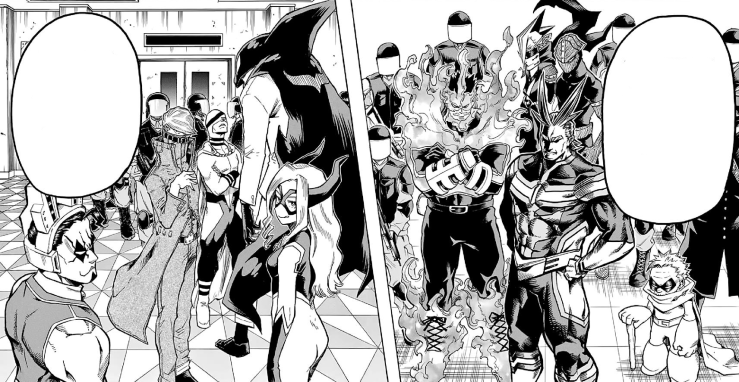 We’ve already seen the launch of a spin-off manga, Boku no Hero Academia Smash!!, and I don’t think that will be the last. The series’ setting is so simplistic that countless possibilities exist. For example, how would Quirk-wielders behave in a less regulated society? Could there be different approaches to Quirk control in different countries? What kind of an effect would Quirks have on warfare? To say that the series is currently undeveloped would be an understatement in itself. Especially considering that shounen big-hitters seem to be ending left, right and centre as with Nisekoi and Bleach, I have no doubt that Shueisha will continue to launch similar spin-offs to fill the gaps in it’s line-up. Beyond that, light novels and drama CDs will be popping up almost definitely to help flesh out the series’ universe.

But beyond a business perspective, being able to capture your imagination is a wonderful feat that only few series will be able to do for you personally. For me, these include Fullmetal Alchemist and Fate/stay night. Although this may be too soon to call for Boku no Hero Academia, I am certainly very interested in it’s universe and the possibilities it offers. By presenting a sound concept, these types of series can stay with you long after they have finished. To become a true masterpiece of the genre, this is a hurdle the series must overcome – but it is already well down the path of doing so.

The power of one – but not too much power, mind

Shounen has a big problem. That’s right – the problem of “OP”. Too many main characters in modern shounen too easily attract such a label, and for good reason. Many of them don’t experience proper development which leads to dumbfoundedness when they suddenly gain miraculous abilities as a result of “willpower”. Yet thanks to Deku, Boku no Hero Academia is able to avoid this common problem.

Deku is at a disadvantage from the start. He can’t control his Quirk, which causes untold damage to his body. Therefore the entire series almost hinges on how Deku learns to control his Quirk – which is done very well, as all of these developments are entirely logical. This ensures that Deku grows alongside reader’s expectations and does not suddenly become too strong. Rather, Deku’s growth is a slow one that I imagine is far from finished.

Outside of Deku’s Quirk, he himself is not typical main character material. He’s a hero “otaku”, an outcast from society, and someone who struggles to stand up for himself. This not only makes him more relatable and interesting than an infallible character but immediately lays the foundations for subsequent development. As Deku learns to better himself personally, this also helps feed into helping readers believe in the reality of his Quirk development as they can already understand Deku on a personal level. In summary – Deku is great.

Knowing when to say goodbye

Having a set ending is a rather new phenomenon in shounen. Previously series tended to run with their scenarios for as long as they were serialised. This approach is fine, as long as mangakas don’t run out of ideas. But as serialisations stretch on for sometimes decades, this becomes more and more of a problem. One way to subvert this problem is by having a definitive ending in mind; a trend set mostly by the success of Assassination Classroom, which ended serialisation recently after a run of only 4 years. I’m glad that other series such as Boku no Hero Academia are following suite because this style of storytelling has far more benefits than the established method. 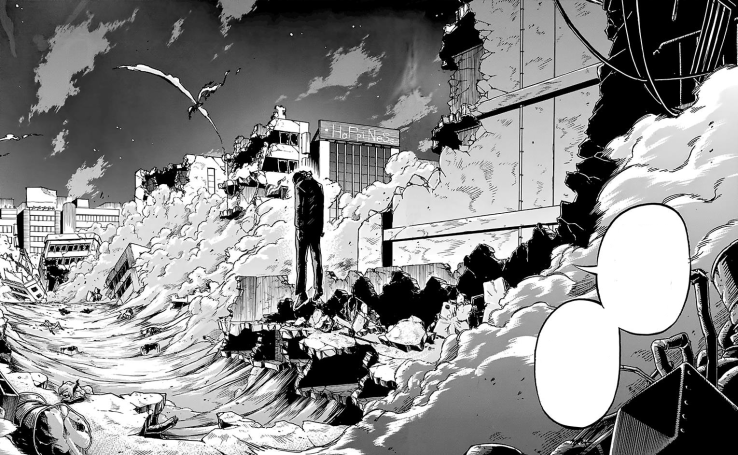 One such boon is that the pacing is greatly improved. Anime may have more evident filler arcs but manga has them too. If authors don’t use filler arcs to bide for time as they try to come up with more ideas, then often they drag out the current arc. Yet if authors already know where the story is headed, they don’t have to use these kind of tactics. Horikoshi has already stated that he knows how the series will end and doesn’t intend for the series to go over 200 chapters. Although that number may be an under-estimation as things almost never go to plan, the fact that such a number even exists means that Boku no Hero Academia doesn’t suffer from a slowdown in pacing. In fact, the series’ arcs are much shorter than that of it’s contemporaries. This in turn improves overall how the story is told as it avoids bloated, drawn-out arcs – holding the reader’s attention and sustaining their interest much more effectively.

Secondly, having an ending in mind helps Boku no Hero Academia to aptly set up character arcs and establish characters that will (most likely) play an essential role in the conclusion of the story. The main antagonist has already been introduced at this point in the story, which is about half done by my reckoning, which means that you won’t be angered by the sudden introduction of a supposedly powerful foe, nor will you be unsure as to which villain is actually the antagonist. With regards to the protagonists also, we’re already beginning to form some kind of idea as to how the final battle will play out which helps build our anticipation for it. So essentially the fact that Boku no Hero Academia already has a set ending means that the series will perform better in the long-term rather than dropping off when the mangaka run out of ideas. It almost definitely won’t have a half-baked ending like the recent Bleach ending. I hope.

Who knows if Boku no Hero Academia will end up being a masterpiece of the genre? I certainly don’t, mostly because it’s not even nearly finished. However I doubt that the new Jump front-runner will drop off too heavily simply because of the five aforementioned aspects of the manga, which make it stand out among it’s peers as an exceedingly well-crafted work. So here’s to it’s future. And if you haven’t experienced it yet in the present, why not? You can read Weekly Shounen Jump for only $25 a year. That’s a great deal, and I’m not even sponsored by Viz. Honest.