When Assassination Classroom aired it’s first cour in Winter 2015, it was not at the top of anyone’s list. I even predicted the show’s premise would grow tiresome by the end of the season. Yet the show has quietly gone from strength to strength – and now, as it enters it’s conclusion – I am devastated at it ending. Assassination Classroom is in actual fact one of the most original and inventive shows out there and certainly the best of the current Shounen Jump big hitters. This probably goes to show that you don’t realise what you have until you lose it.

The genius of Assassination Classroom lies in it’s unusual premise. Class 3-E is the worst of the bunch, the outcasts of the school. Students ridicule those who attend it whilst furiously attempting to avoid the same fate. These rejects are given the task of assassinating the monster Koro-sensei who just blew up the moon; a feat which even the most seasoned of professionals cannot accomplish. On paper this is probably one of the most bizarre premises out there but merely reflects the originality of the show in all of its facets.

I have always found that character-driven narratives struggle to balance character development and plot progression. Boku no Hero Academia this season is a classic example of this. Yet due to the nature of its premise, Assassination Classroom manages to pull this off almost perfectly. There is always an air of uncertainty hanging over pivotal moments in the story, especially during the exam arcs. This is because Assassination Classroom relies on the actions of its characters to advance its plot – not the other way around, as is the norm.

Speaking of characters, Assassination Classroom has a fairly large cast (around the same as Mayoiga). I was pleasantly surprised to find this was not a cast of 30 or so archetypes. Each character is identifiable and unique (obviously some are more recognisable than others) because they act like normal human beings. The most animated character of them all is arguably Koro-sensei, yet even his personality does not come off as abrasive or contrived. Koro-sensei is mischievous because he is, not simply because it is a role that needs filling. Karma is also a very strong character with interesting and relatable character development. Without spoiling too much, Karma is not all he comes across as. 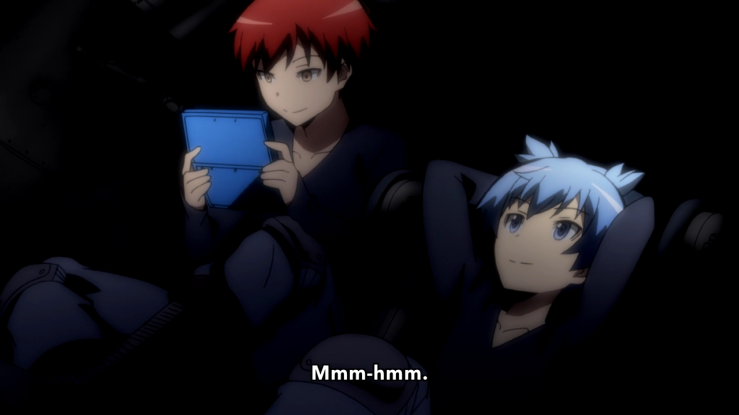 The genius of these characters is that do not make up just a cast but also a believable class unit. Not every character knows all the others. There are different circles of friends and characters rarely tend to interact outside of them. Crucially, characters are not forced together for the sake of narrative. Its much easier to find yourself believing in the existence of Class 3-E than the existence of Team 7 in Naruto, to place the show within it’s Shounen Jump context.

Yet what use would these characters be if they did not form part of an interesting narrative? As chance may have it, each arc of the show brings something interesting along with new challenges and consequences. The show quickly dispelled any of my notions that its concept would run dry. It constantly manages to find new ways to explore and develop its concept. The stock assassinations, of the type you may expect, quickly disappear from the narrative as the show becomes more and more original. You have one genius arc where Class 3-E must apply the fundamentals of assassination to exams as well as one where they must be applied to the ‘real world’. The Island arc stands out as my favourite yet it is equally hard to pick a favourite as it is to pick a least favourite. The show is genius in how it constantly reinvents its own concept whilst simultaneously making it so compelling.

There was no notion when I first started the show that I would become so attached to it. That much I have made clear. Yet as to why this show is so compelling lies ultimately in the relationship between Class 3-E and Koro-sensei. We are as distant to Koro-sensei as Nagisa, Kayano and Karma are. We grow and foster our love and admiration for him. We then can understand their relationship which is really the cornerstone of the show. The tentacled, eager and easily excitable pervert that is Koro-sensei is as precious to us as he is to the students of 3-E. Therefore when its time to say goodbye, we understand why some of them might not want to.

Perhaps its timing has made the show that much more potent; I am currently in my last year of school and I’m preparing to say goodbye to as many people as Class 3-E are. Every time I listen to Bye Bye Yesterday, I can’t help but feel a pull on my heartstrings. However I wouldn’t put that just down to correct circumstances. I feel as much melancholy for the end of school as I do for the ending of Assassination Classroom. As heartless as this makes me – I’d probably say I’m more sad about the latter.

Beyond a personal level, as a show Assassination Classroom is grossly underrated and underwatched. I only know one other person who watches it and every time we do, we always complain about precisely that. I can’t say enough about Assassination Classroom whether it be the narrative or characters without even mentioning the stellar production side of this show (handled by Lerche). I can wholeheartedly recommend this show precisely because it has a lot of heart. A lot more heart than the large majority of other shows out there. 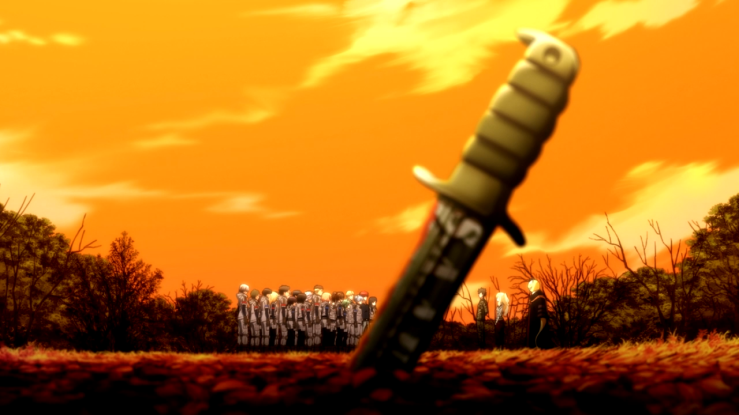 So maybe when you are able to understand this, I won’t be the only one struggling to let go of Assassination Classroom and saying Bye Bye Yesterday. Maybe I’ll always be part of the small group begging you to watch it. But I’ll never forget my time with it.

4 thoughts on “The Genius of Assassination Classroom”